Which action camera is the best? Not so fast, gopro…

We wanted to know which action camera is best, and we wanted to know specifically which was best for skiing and boarding, since that’s what we do. So we took some of the top action/POV cameras on the market: the GoPro Hero3+ Silver, Contour+2, Epic Carbine HD, and iON Air Pro 2, and pitted them head-to-head in an on-mountain trial to see which one stood out as the best POV camera for the money. We know what you’re thinking, but the results may surprise you.

We have more in-depth reviews on each POV camera should you want to know more.

Quick Note on Action Camera Price. We don’t think price is a huge factor here. They are all pretty much in the same range ($219-$299), so it’s not as if you can spend more to get more. You can only spend more to get a bit more, so we don’t want to belabor this point. But there are some added costs to get the mounts you want and perhaps an extra battery (highly recommended), but you can pretty much get clear of this purchase—no matter which camera you choose—for $400. Less than the cost of a phone or tablet.

Getting over the Bar: Head-to-Head Filming

We believe the biggest concern that most people have is that the video quality of other cameras can’t match that of the GoPro. So we strapped all of these cameras to a ski, and tried them out, filming the exact same thing, at the exact same time. 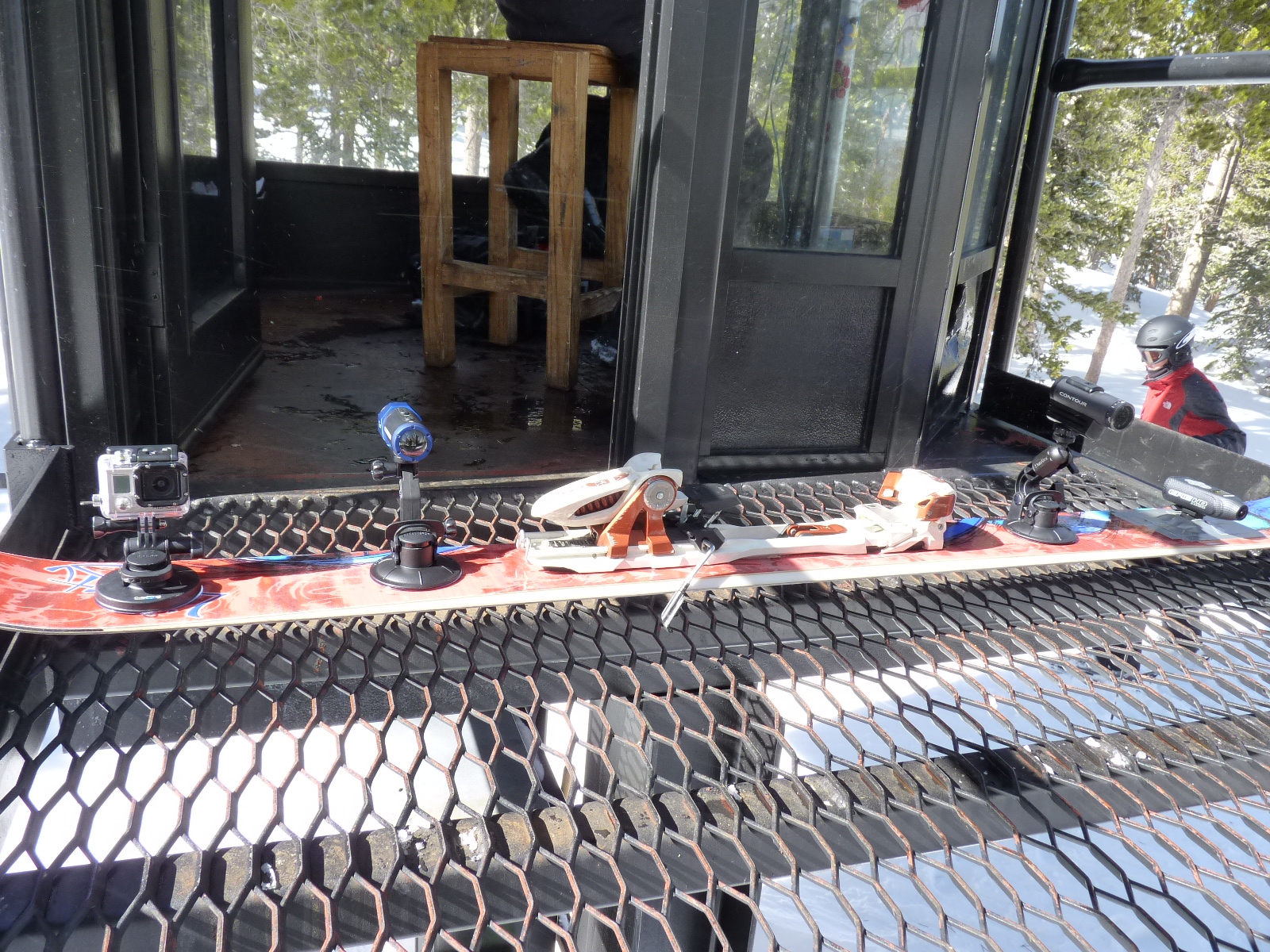 As with most things, this day didn’t work out. The batteries (as we’ll get to in a minute) on pretty much every camera pooped out on us, despite having a full charge.

Between our first and second attempt, we realized that the Epic Carbine had fallen too far behind the competition to catch up, and we figured video quality being on par with the GoPro was likely not the top metric for buying an Epic. So we didn’t use the Epic for this trial. Sorry guys. For this trial, we stuck the Top 3 to a piece of plexi that we had glued to a board so that we could hold it and point to the action. (Some resorts wouldn’t let us take up our extra ski, so we had to get creative. Looking at you, Beaver Creek.) 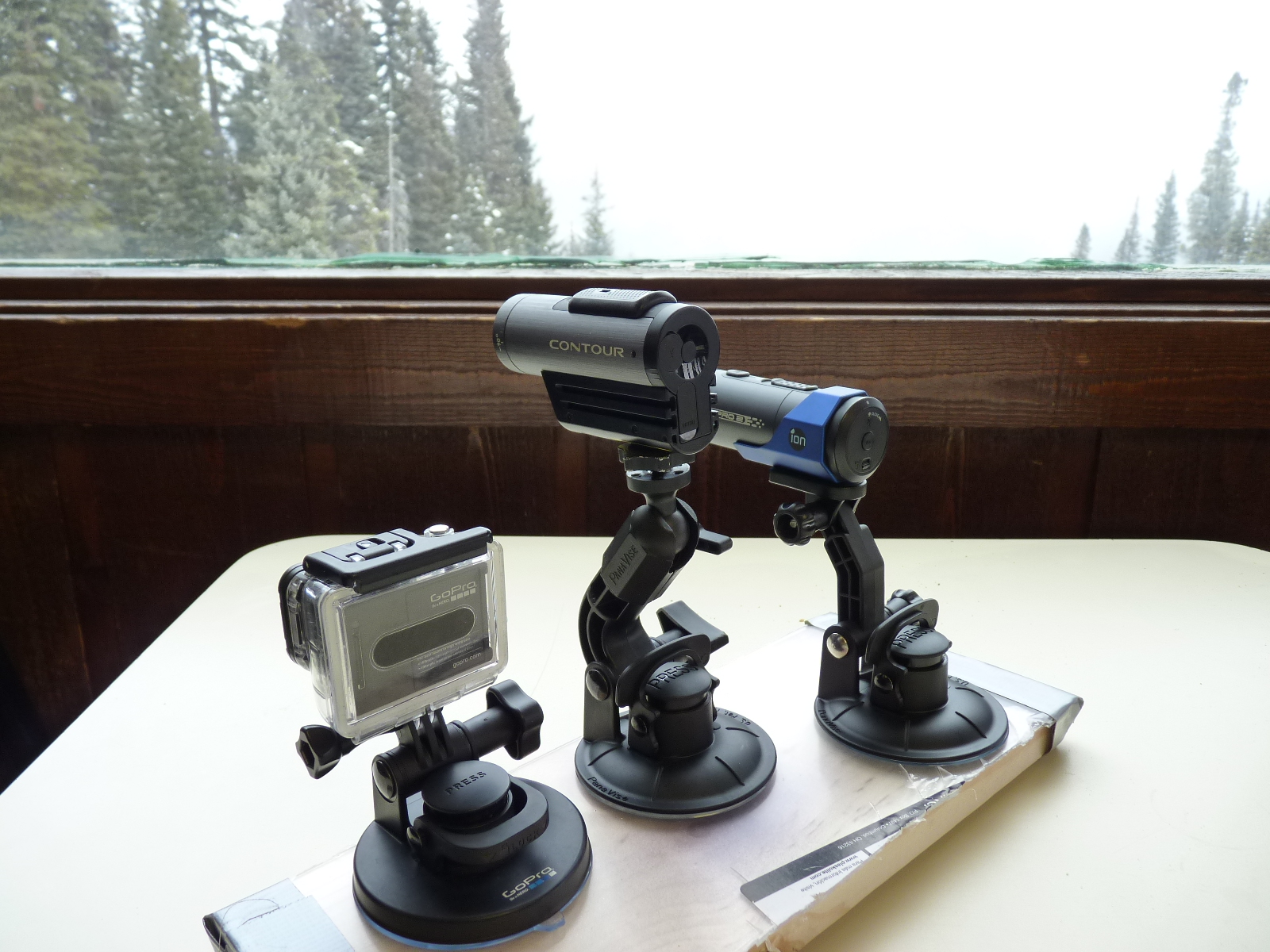 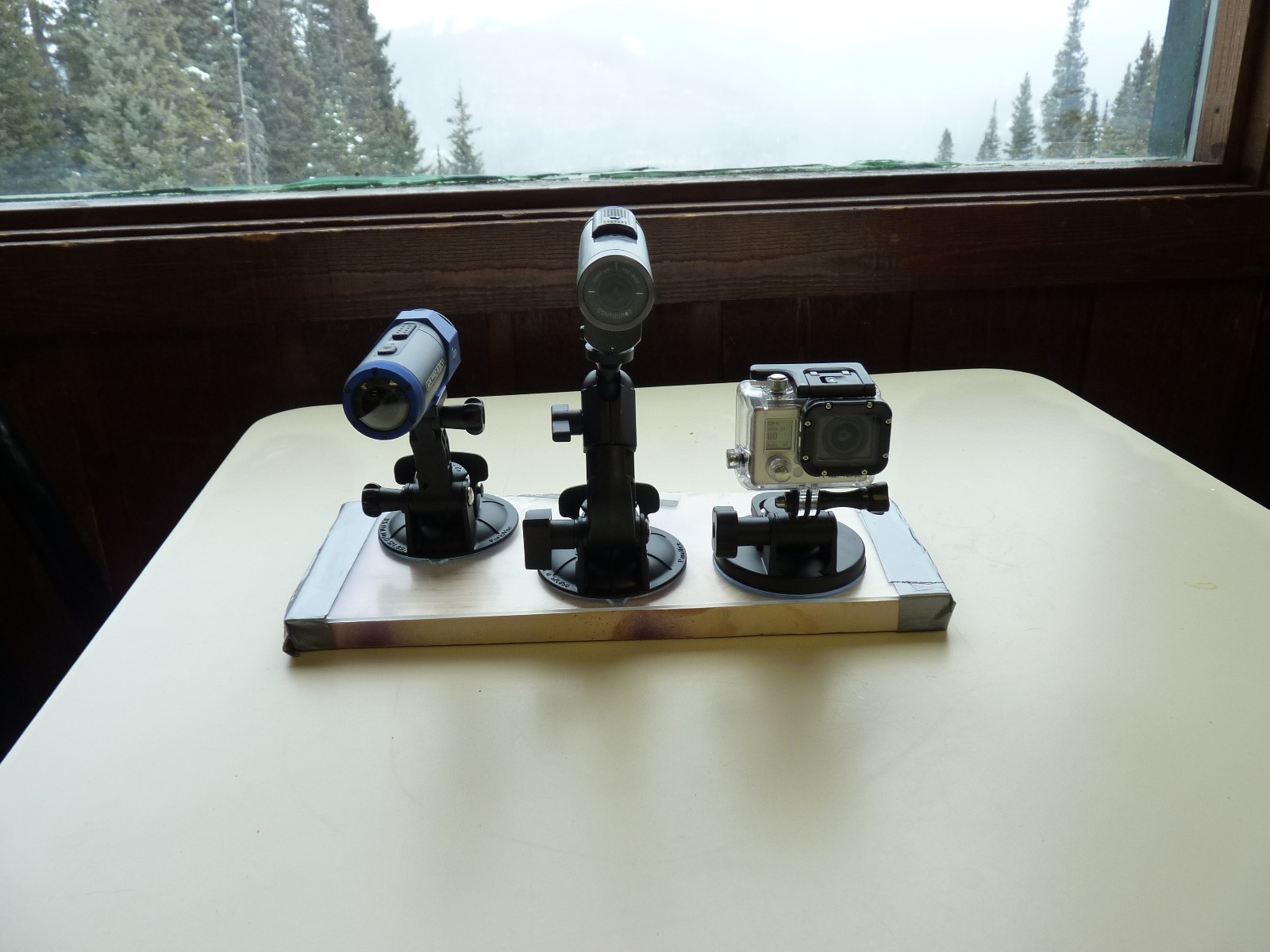 Here are clips of UN-touched footage from the GoPro Hero3+ Silver, Contour+2, and iON Air Pro 2. This was filmed at Purgatory on the Legends trail on April 5, 2014.

As you can see, the quality from each of the cameras is very similar. Professional photographers and video editors can probably spot the differences, but these are consumer cameras and our guess is that not many consumers will have an issue. I have a little documentary experience myself, and I would take any of these cameras for their quality. But note that there is a lot of compression going on to get these to YouTube. When you view any of the footage on your computer or tablet, all of it looks amazing.

Notice the snow on the GoPro? You can also see how the lens guards of the iON and the Contour compare to the GoPro case in the snow. The GoPro case has a little lip (it’s the black part around the edge of the lens) and that basically holds the snow in place and won’t let it off. When you are shooting–and especially if this is on your helmet–you will never know until you look at the footage later. Whereas the iON and the Contour both shed the snow pretty easily. The iON has a parabolic cap, so snow slides off. The Contour has a flat cap, but snow never stuck to it even for a second. Pretty cool.

Also, the Epic does just fine. The quality isn’t quite as good, but it’s certainly passable.

This is how we use the cameras and how we think most people will, too: on our helmets to film what we are doing, and pulling them from our pocket to catch what others are doing. Helmet and google mounts are great, but they can make some horribly shaky footage if you aren’t skiing in deep powder. Our demands for these moments are Communication and 0 to 60 Speed.

Communication. You need to know when the camera is on, know when it is shutting down from being out of juice, and know for sure when it is recording (particularly, if it is on your helmet and you can’t get to it.) The iON is tops for communication by a long way. It vibrates when it starts recording, when it stops, a shorter vibration when you have taken a photo, and also a buzz when it is shutting off. Plus, it has red and green lights to tell you the very same. But most important, it has a sliding button so you always know when you have it switched to record. But wait, there’s more! If you leave the camera on for two minutes, it will shut itself down for you, and BUZZ to tell you what it’s doing. Good guy, iON.

The GoPro beeps three times when it’s turning on or off, and once when recording starts. It does have a display, which seems great. However, when you are looking at the display, it’s because you need to know if it’s on. And THEN you are just filming your face.

The Contour, like the iON, has a sliding panel, but is a few indicators short of what the iON does.

The Epic has a sad, seven-segment display and some poorly marked buttons (I think they are M and D?), so they aren’t cutting down any nets.

Communication might not seem like a big deal, but believe us, it is critical. You’re going to forget that your camera is on and bottom out the batteries. Or you won’t be able to tell if the GoPro is recording without filming your face checking the display. I’ll bet half of all GoPro videos start with someone looking to the camera to make sure it’s on.

0 to 60. In the skiing world, there are people all around you, and you just can’t predict when something video-worthy might happen. Being able to go quickly from a cold start to recording is a must, I promise you. The Contour and the iON are tops in this category, coming in around 2 seconds each. The Contour is just a hair faster, probably around 1.8 seconds to get going. Out in the field, just two seconds to get in the game? That’s pretty excellent.

The only camera that GoPro can best with their 5 second wait time is the Epic. With the GoPro, you have two different buttons to push—in sequence, Mode then Record—to get it going. Same with the Epic. 5 seconds may not sound like a lot, but it is too long. You don’t want to miss golden moments like this:

Imagine your phone with 20% battery left. That’s about how all action camera batteries function. It’s going to go quick. The batteries are small to keep the cameras small, ergo their capacities are small. Where the Epic actually makes some Stone Age sense is it uses 3 AAA batteries. They only last an hour, but you can swap them out and you’re ready to run again. With all the other cameras, you are down for a couple hours getting a full charge.

The GoPro does need a reboot on its battery every so often. We got to a point where it just wouldn’t hold a charge—after about a year—but we found some support and got it fixed. But you have to watch out for this. We weren’t able to film on a few different days because the display said it was charging and charged, and it wasn’t.

Pro Tip. No matter what camera you choose, buy an extra battery (also a huge SD card, 16 gb at a min.). It is not possible to get through a full day—even a half day—of skiing on one battery. Two batteries could last the whole day, especially if you are in Summit County and standing in long lift lines not recording.

The iON, Contour, and Epic all have very similar, bulletlike shapes, and they are all very easy to draw from your pocket to shoot. Plus they are more streamlined on your helmet.

The GoPro case is practically a cube with handles. It doesn’t fit in your pocket easily, nor dragged from it with grace. And because it is in a case, the buttons take some effort to push with gloves on. The GoPro is by far the hardest to manage given gloves, and pockets, and shape. When you combine these factors with the 0 to 60 time, it is legitimately 10 seconds or more before you are ready to shoot with the GoPro.

Where iON wins the race is that it’s waterproof right out of the box. You don’t need a special case (or to buy a special case, as Epic makes you do). It’s all set with its aluminum and rubber housing.

The photos are all in line and look good. The Contour doesn’t have photo capability, which is a headscratcher. It is easier to take photos with the GoPro, since it has a typical camera shape and is easier to get both hands on it. The iON and Epic are more difficult to hold steady and also push down the button. The iON does come with a mini-tripod to help with this, but you don’t really want to drag that around with you.

If you were given any one of these cameras, not knowing that any of the others exist, you would be satisfied with the use and end product of any of them. But when put in a room together, iON wins the battle pretty clearly. Don’t get us wrong, the GoPro is an outstanding camera, a great buy, and fits inside a super-rugged case. But with the iON, for less money, you get a better machine that was designed with the how consumers use action cameras in mind, and definitely with skiers in mind. The iON is our pick.

For the media, if you have any questions about this piece, these cameras, or would like a review of your product, please write to Matt Myers at matt@coloradoskiauthority.com

Note on the trial. This trial began for us in March 2013 and carried through to April 2014 for various factors. There are other action cameras on the market and other camera makers now. We didn’t exclude those not included here for any specific reason beyond these were the best four that we found and talked to at the 2013 SIA Snow Show on the trade show floor. Even a year later, we feel these four best detail the action camera landscape, from the biggest, to the underdog, to the on again/off again team, and the last place kid vying for some space.