Click on each image to view a larger version. 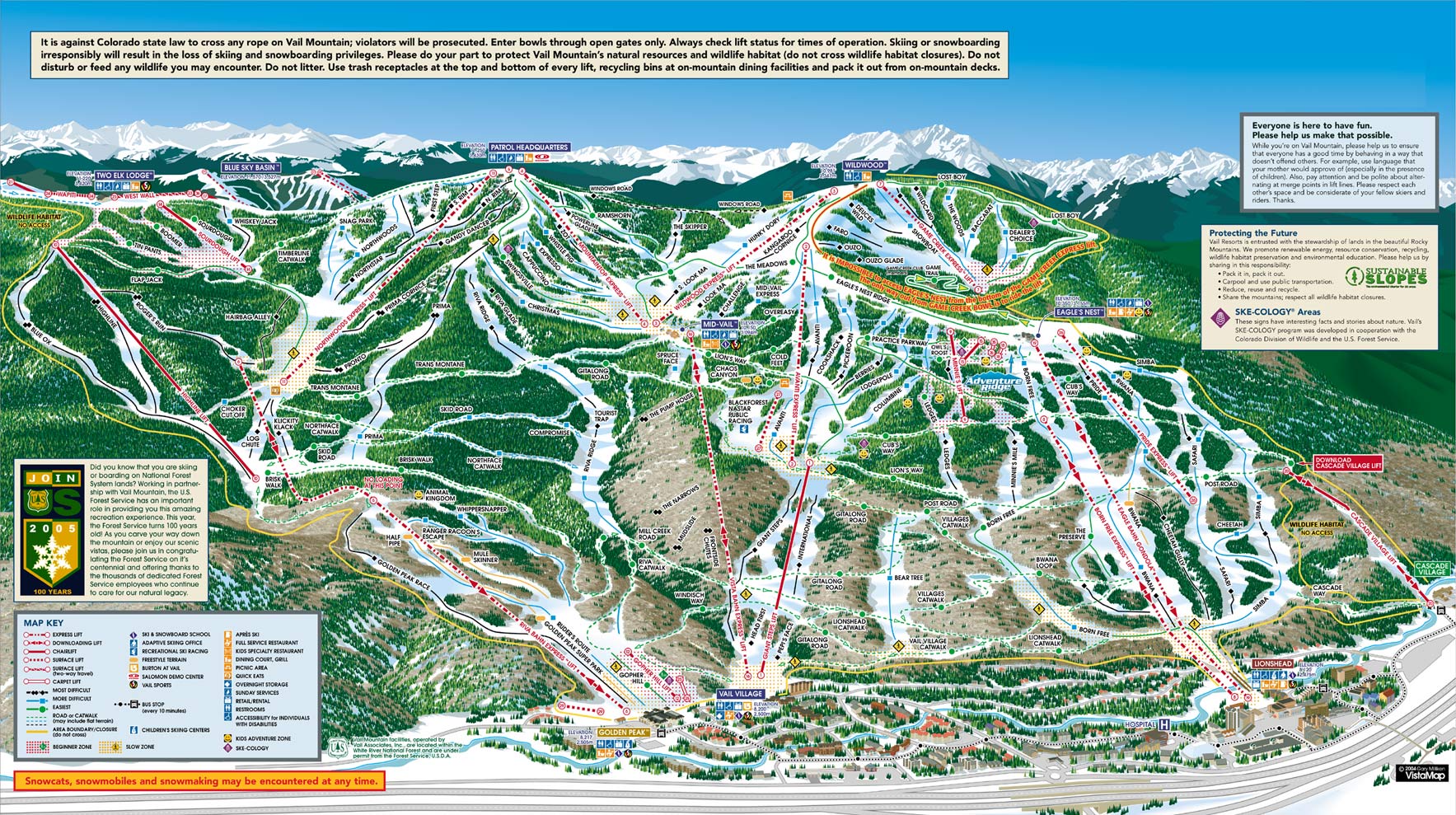 Vail Ski Resort is just massive, and you can ski for a long time just on the front side without doing the same run twice, but it can also be easy to get turned around or stuck running the same runs or worse: in long lift lines because you made some wrong turns and ended up back at the base area. While the Vail Trail Map is the very best guide for where things are, here are some pointers that might help you understand the mountain a little better.
Vail Base Areas. There are 3 (some would say 4) Base Areas at Vail. From skier’s right to left, they are Golden Peak, Vail Village, and Lionshead. Cascade Village is even further west, but you can’t ski into it, only hop a lift from it, so it is not a traditional base area with food and apres ski and the like. No offense to Cascade Village. I’m sure it’s very nice. Golden Peak and Lionshead are where the children’s ski schools are located.
No matter which section of the front side you are skiing, you will always have options for difficulty. So if you are with a diverse level of skiers, let them know this fact up front, and then show him/her the frontside trail map. This will alleviate some of the pressure that many beginners feel when travelling with more advanced skiers.
Also remember that Vail only has greens, blues, and blacks. There aren’t any blue-blacks, like at Breck, or double black diamonds, like at some other hills. So black runs can vary from kinda hard to really hard all under the same label.
Golden Peak. This is far skier’s right and it gives you access to the Northwoods Express Lift and the Highline Lift. Because these lifts don’t load in the same area and because Double Black Diamond runs dominate this side of the hill, the crowds can be light, and you can get a lot of skiing done in a short amount of time. The top of the Northwoods Lift is one of only two easy access points to the backside of Vail. There is a third–which is from this side of the hill–and you need to take the Highline Lift up, ski down Flapjack, then take the Sourdough Lift up to Two Elk Lodge. It’s a bit of a schlep, but it happens all the time.
Vail Village. Usually very crowded, so you want to spent as little time here as possible if you like to ski all day. You can get trapped behind slow skiers and long, crowded lift lines. The main lift here is the Vista Bahn Express, which is the only chair access to Mid-Vail. Mid-Vail has a very large, slow ski zone and two lifts that can take you to different sides of the mountain, so this is can be one of the most congested areas of the hill. From here, you have three options. You can take the Mountaintop Express Lift, which takes you to the very top and provides access to entire backside at Vail. You can take the Wildwood Express Lift, which will give you access to the remaining skier’s left areas of the front side–including Game Creek Bowl–as well as the Sun Down Bowl on the back side, which is skier’s right. Or you can ski elsewhere from here. When you look at the Vail trail map, you’ll see that vail Village is pretty much the core of the front side, providing access–though not always direct–to nearly every other area of the hill. As such, the crowds.
Lionshead. There are two lifts here, the Born Free Express and the Eagle Bahn Express. They both head in the same direction, except that the Eagle Bahn goes twice as far. Remember this point: neither lift will get you higher than mid mountain. If you want to get to the other side of the mountain or the backside, you have quite a schlep ahead of you. From Eagle Bahn, you do have some access into the Game Creek Bowl, but only at the lift level. Unless you are fine with skiing back down to Lionshead, you are pretty much taking a catwalk–either the Game Creek Trail or Cubs Way–to get to another lift. Quick note of advice. If you want to get to the back side or the east face (skier’s right) and you find yourself at the top of Eagle Bahn, it is quicker to ski down to the Avanti Lift, take it up, and then ski over to Mid-Vail.
Game Creek Bowl is extreme skier’s left, and it is a great place to spend a few hours. It is far enough away from everything that you’ll want to commit to being here for awhile once you arrive, but it has a good mix of everything: blacks on the right, blues on the left, and Lost Boy–a nice long green–on the far left. It is usually pretty quiet back here, and the lines are short.

The backside at Vail is nearly all black runs interrupted by a few blues that are mainly catwalks. Vail’s backside is for experienced skiers. While there are several blues on Blue Sky Basin and there is access to Blue Sky from here, just keep the terrain in mind when travelling with less than expert skiers.

Sun Down Bowl. This is far skier’s right, a self-contained bowl that is 100% black diamond. There are 11 different runs in the Sun Down Bowl, and they all funnel into the High Noon Lift.

Sun Up Bowl. The Sun Up Bowl is one peak over to skier’s left from Sun Down. Another 10 or so black runs in this bowl, and all the runs funnel down into the High Noon Lift. (Get it? sun up, sun down, high noon??) Anyway, there is the Sun Up Lift that is in the middle of the Sun Up Bowl that can take you out of the whole Sun Up/Down area further skier’s left into the Tea Cup Bowl and China Bowl. There is also a sneaky liitle catwalk called Sleepytime that runs along the edges of Sun Up and Tea Cup Bowl. This catwalk is a very long, leg-burning run that will take you back to Blue Sky Basin.

Tea Cup & China Bowl. Tea Cup is just a half face full of black runs, but the China Bowl is a full bowl that is about 2/3 black runs and 1/3 blue. You will need to either access the blues from the top or by skiing down into China Bowl and taking the Orient Express Lift up, as the blues are on the far skier’s left side. The bottom of China Bowl provides access to Blue Sky Basin.

Siberia Bowl. On the extreme skier’s left is the Siberia Bowl, which has about a half dozen wide open black runs and a long, meandering blue run around the perimeter called Silk Road. No matter which run you take here, you will always have to get some leg burn on the catwalk back to the Orient Express Lift. 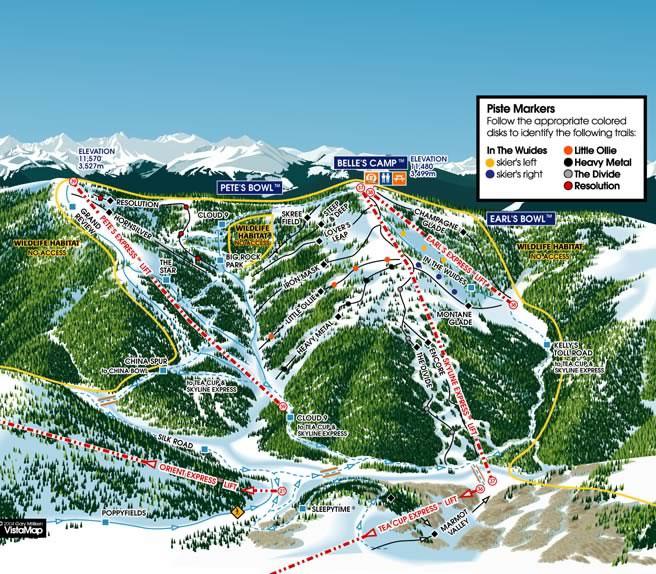 Blue Sky Basin will not disappoint. Tree skiing, chutes, cliffs, and some backcountry feel, this will definitely not feel like the rest of Vail in spirit or terrain. There are two lifts that provide access from the bottom of China Bowl: Skyline & Pete’s Express. There are also two bowls here: Earl’s and Pete’s. We want to party with those guys.

Skyline Express. This is the main lift into Blue Sky Basin, with access to restrooms and food/drink at Belle’s Camp. This is the place to bring your lunch. Most people have packed it in, and they lounge about like lion’s after a kill, storing up carbs for the bottom half of the day. It can get crowded, but everyone is in a good mood up here. There are open grills, where weary skier’s warm PB&Js and their fingers. (They don’t eat their fingers.) Skyline offers the most access, which makes it the better lift to take in most sections.

The far skier’s left side has some glades with some big steeps, and typically very deep, mostly untouched snow. My buddy Cole tore his MCL back here on the Champagne Glade. He made a weird noise when it happened. We don’t talk about that.

Pete’s Express Lift. This gives you access to the other half of Pete’s Bowl that you can’t reach from the Skyline Lift. A couple of hard turning blacks on skier’s left and a few long blues on the other side. There’s not as much over here, but it’s worth it.

And then there’s Cloud 9, my all time favorite run on any hill anywhere in the world. It starts in the trees and funnels you into a shoot with people entering from all sides and from all levels. It’s like a video game.

It takes a long time to get back to Blue Sky from the base areas, so it usually shuts down early–around 315–to make sure everyone has enough time to get back. So keep this in mind if you are planning to go. And you should.

Vail has 5,289 skiable acres, more than any other resort in Colorado. It is easy to get lost. Vail trail maps (the folding ones) are available at every lift and there are huge billboard maps at some of the big ones. (I’m sure you can also pull one up on your phone, but you’ll have to take off your gloves.) Please, stick a map in your pocket. Yes, of course, for safety, but also it’s just so much work to get back to the trail from lost, and it just takes so much time away from what you came there to do, and it can all be avoided if you just carry a frickin vail trail map! We ask so little. Don’t you want us to be happy?